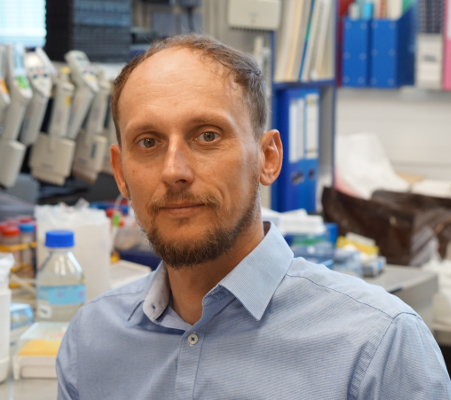 The main research focus is on blood-brain barrier (BBB), the layer of endothelial cells forming the vessel/capillary wall in the brain. Recently, the BBB is considered to be a part of a highly dynamic system called the neurovascular unit (NVU), consisting of vascular cells, glial cells, and neurons. An important area of research in NVU studies is the investigation of damage and dysfunction in different diseases. Our aim is to investigate changes in NVU in a group of neurodegenerative diseases called tauopathies. Tauopathies represent a heterogeneous group of neurodegenerative diseases characterized by abnormal deposition of the microtubule-associated protein tau in cells of the nervous system (neurons and glial cells). In collaboration with Dr. Maria Deli from the Institute of Biophysics, Hungarian Academy of Sciences in Szeged we have developed in vitro BBB model based on the culture of cerebral endothelial cells, astrocytes and pericytes. We showed that exposure of brain endothelial cells to tau protein does not evoke any significant responses. However, when glial cells were present, inflammatory mediators produced by these cells, such as NO, cytokines and chemokines, significantly modified endothelial properties such as transendothelial electrical resistance and permeability for small molecules (Kovac et al., 2009).

The second area of interest deals with an attractive topic – biomarkers. Biomarkers are objective, quantifiable characteristics of physiological or pathological processes in the human body.  We are interested in discovering molecular biomarkers (proteins or metabolites) that help diagnose, and predict treatment response or prognosis of Alzheimer’s disease and other tauopathies. We are using several state-of-the-art approaches such as ultrasensitive immunoassays, quantitative and qualitative proteomics, peptidomics and metabolomics. At this time, we have in operation four LC-MS systems – one single quad, one ion trap, two triple quads and matrix-assisted laser desorption/ionization-time of flight mass spectrometer (MALDI-Tof/Tof). We have developed several new analytical methods for quantification of different metabolites in animal and human biological fluids such as neurotransmitters (Kovac et al.,2014), thiols (Kovac et al.,2014) and  markers of the immune system (Galba et al., 2016).

The group has intensive national and international collaborations. These include the cooperation with Prof. William Banks at the University of Washington (Seattle, USA), where Dr. Kováč worked as a postdoc and learned techniques of measuring the blood-brain barrier permeability in vivo, with Prof. Yoichi Morofuji at the University of Nagasaki (Nagasaki, Japan), with Dr. Maria Deli at the Biological Research Institute in Szeged (Hungary), and with Assoc. Prof. David Friedecky at the Medical University in Olomouc (Czech Republic).

Kovac A, Svihlova K, Michalicova A, Novak M. Liquid Chromatography-Tandem Mass Spectrometry Method for Determination of Homocysteine in Rat Plasma: Application to the Study of a Rat Model for Tauopathies. J Chromatogr Sci. (2014)